Willkommen! Germany has long been called the land of Dichter und Denker – poets and thinkers. However, contemporary Germany is also the land for travelers and explorers seeking multicultural and dynamic cities, bucolic villages, and pristine nature. Race bikes along a Nazi-era airport tarmac in Berlin, travel by solar-powered ferry across an Alpine lake, watch the wind turbines and half-timbered houses whiz by through the window of a high-speed train as part of your German adventure. Get an up-close view of Germany that goes beyond Sauerkraut and Bratwurst.

Custom programs in Germany are ideal not just for German language teachers but also educators in history, STEM, government/civics, and the fine arts.

Request Pricing
Back to Destinations

We recognize the extraordinary role that meaningful international travel can play in shaping the lives of young people, and strive to create itineraries which push travelers to see themselves and the places they visit in a new and exciting light.

Walking Tree organizes programs for teachers and their students.
Don’t see your area of interest highlighted in the itinerary below? Plan your own customized trip today!

Walking Tree Travel specializes in customized group travel. The itinerary below is from a recent program and is provided here as an example of just one of many experiences that are possible in this destination.

Today we fly to Munich, Germany!

Today we arrive in Munich! After we get settled in our hostel and taking some time to rest after the long haul across the ocean, we will walk up the tower of the Church of St. Peter to get a great view of the city center. For dinner we will sample some traditional, and delicious, Bavarian food.

The best way to explore a new city is by bicycle and we will begin in Munich with a bike tour that includes all of the major historical sites in the city center. We can stop at the beautiful Viktualien Market to enjoy lunch from local vendors and look around inside some of Munich's oldest churches and breweries (like the famous Hofbräuhaus). Tonight we'll try another important German cuisine for dinner, Turkish street food in one of the city's most diverse neighborhoods.

We will bear witness to the Holocaust today at the Dachau Concentration Camp Memorial Site just outside of Munich. We will return for a peaceful dinner and stroll through the English Garden in Munich at the end of an important day.

For our morning in Munich we have the option of visiting the European Commission office or the Bavarian state government (Landtag). After a short hour-long train ride we will arrive in the historical city of Nuremberg that was once a trading mecca in the Holy Roman Empire as well as a center for political rallies during the Third Reich. After dropping off our things at the medieval Imperial Castle where we will be sleeping, we will explore the ancient half-timbered houses and churches in the city center. We will also get a chance to try the local specialty - Nuremberg Bratwurst. Oh, and did we mention we were staying in a castle?!

Today we will have an in-depth exploration of Nuremberg's connection to the Third Reich at the Documentation Center on former Nazi Party rally grounds. Afterwards we will have time together to decompress and process what are sure to be emotional impressions as we settle in for a relaxed dinner.

Then we will board the train for a stunning ride into the foothills of the Alps, arriving in the town of Fãssen in time for dinner.

Bavarian King Ludwig II created a fairytale world in his 19th-century palace, Neuschwanstein. We will visit this stunning building today and have some time to explore the surroundings. Later in the day we can have some free time in town or learn more about this beautiful natural environment of this region at the Forest Experience Center.

We are so close to Austria, so let's go! We'll take a quick train across the border to go see an amazing complex of medieval fortress ruins at Burgenwelt Ehrenberg and we walk across one of the world's longest pedestrian suspension bridges. Have your cameras at the ready!

After a short morning train ride back to Munich we will tour the exciting BMW Welt, which can include the plant or the museum. The evening is ours to enjoy a farewell dinner.

After breakfast we'll board a plane back across the Atlantic. Auf Wiedersehen!

Lodging: Your own bed, eventually!

"The whole program, top to bottom, was the best experience I've ever had or heard of anyone having. Kids and parents were so happy."

Program Types in this Destination

Don’t see your area of interest highlighted in the itinerary above?
Plan your own customized trip today!

Estimated airfare*
Not included: Baggage fees, Airline minor fees, Passport/visa fees, Laundry, Souvenirs, Activities not listed on the itinerary.
*Estimated airfare: In order to give our travelers the best possible price, we break out airfare from the Program Tuition. We will still handle all booking and ticketing via our flight partner who has access to special fares not available to the general public. Families will be invoiced for the flight once we are able to secure the best airfare for the group.

Walking Tree Travel has developed tools that will help our travelers mature as global leaders before, during, and after their travel program. These simple, engaging activities are meant to spark discussion, frame the group’s experience, and prepare participants to travel ethically and effectively on our programs now and on their own into the future. Our activities also encourage students to take initiative as leaders in their local communities to make a difference at an immediate level, helping them to understand the impact they can have when they combine cultural understanding with personal and social responsibility. 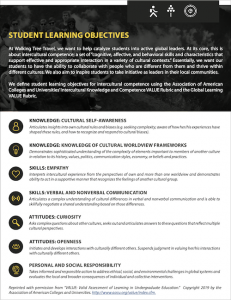 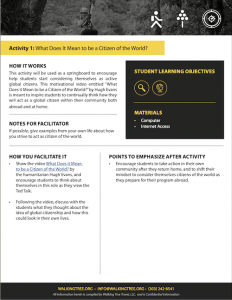